What is the Consumer Financial Protection Bureau CFPB 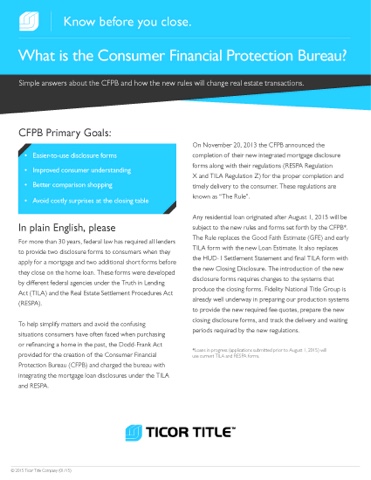 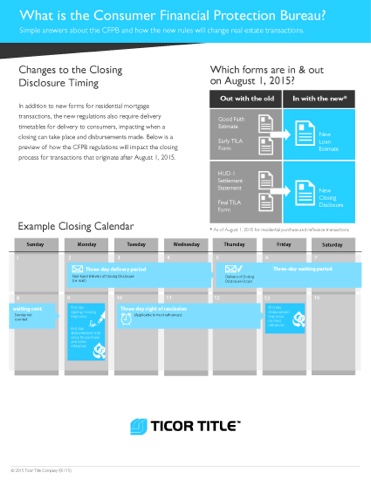 Posted by Unknown at 3:09 PM No comments:

CFPB know before you close

Posted by Unknown at 2:21 PM No comments:

Email ThisBlogThis!Share to TwitterShare to FacebookShare to Pinterest
Labels: CFPB -Know before you close

Please review CFPB updates in my news links: What realtors, lenders, lawyers and other escrow officers need to know on or before August 1, 2015 about the Consumer Financial Protection Bureau (CFPB)
http://nevadaescrowofficer.com/Title-and-Escrow-News-PIO.html
Thank you for your time,
Norma
Posted by Unknown at 9:43 PM No comments:

Nevada cracks down on Notaries Public going too far!

Nevada is cracking down on Notaries Public that go to far and providing legal advice and preparing legal documents.
Read more about it here in the RJ!
http://www.reviewjournal.com/news/Nevada-cracks-down-notaries-public-go-too-far
Posted by Unknown at 11:13 AM No comments:

Can an escrow officer do a personal deed recording without an escrow?

The answer will almost always be no. Most escrow officers will not risk the liability that "just writing up and recording a deed" outside of an escrow will cause. The escrow officer is liable for any mistakes, liens that they (or you) don't know about. Even if you expect to pay the EO, the service and recording of the document, an error is never worth a career change or a lien for the loss to the title company against her personal home (escrow officers pay for all financial losses out of their own pocket or some tile companies, they will lien an escrow officers home ...regardless of a spouse or not.)
Norma Hoag-
Posted by Unknown at 9:15 AM No comments:

What is a Neutral Third Party?

The escrow officer / title agent and / or the title company are considered a "neutral third party". Independent of buyer and seller and respective agents as well as the Lender.
Simply put, as an example;  if you ask the question "Is this a good deal or am I getting taken to the cleaners by someone?", the title company and / or any of its employees cannot comment or make any reccomendations to you or anyone one way or another in regard to loan quality, commissions, purchase agreements or weather or not your getting a fair price for the property either as the buyer or seller.
We (the neutral third party) would encourage you to consult legal counsel if you have such questions on this topic prior to signing any legal or binding contract.
Posted by Unknown at 12:24 PM No comments:

Soldier Relief Act of 1940 to stop a Foreclosure

If a Real Estate Agents client (seller) is in foreclosure and the property is owned by military personnel and the mortgage payments are not made, then this relief act may stop foreclosure based on certain criteria. The person has to be on active duty in order to qualify. The mortgage loan had to be established before the soldier was called out to active duty. Not only will this stop foreclosure, but it will stop seizure of any personal property while the soldier is actively serving. This is one tool that can allow a Realtor as well as the client buy a little more time to make a productive deal rather than have to take the first offer. This will also allow more time in escrow. If this is a married couple, this will relieve a great deal of stress on the serviceman and the spouse. We all know a reprieve is conducive to clear thinking and decision making skills by all parties.
Posted by Unknown at 9:58 AM No comments:


Signed into law by President Abraham Lincoln, the Act, which became law on Jan. 1, 1863, allowed anyone to file for a quarter-section of free land (160 acres). The land was yours at the end of five years if you had built a house on it, dug a well, broken (plowed) 10 acres, fenced a specified amount, and actually lived there. Additionally, one could claim a quarter-section of land by "timber culture" (commonly called a "tree claim"). This required that you plant and successfully cultivate 10 acres of timber. The Homestead Act remained in effect until it was repealed in 1976, with provisions for homesteading in Alaska until 1986. Alaska was one of the last places in the country where homesteading remained a viable option into the latter part of the 1900s. The Taylor Grazing Act of 1934 substantially decreased the amount of land available to homesteaders in the West. Because much of the prime land had been homesteaded decades earlier, successful Homestead claims dropped sharply after this time.

Here is a sample of a Declaration of Homestead